Dodgy “CBD” oil alert! We test purchased some suspiciously cheap oil on Ebay and guess what our lab test found?

Dodgy “CBD” oil alert! We test purchased some suspiciously cheap oil on Ebay and guess what our lab test found?

We saw some CBD for sale on Ebay that was suspiciously cheap – advertised as 10ml of Hemp Extract oil, 4500mg content, a snip at £14.95. With free shipping no less. Now they don’t actually say CBD in the product title because this will get their Ebay listing taken down in about 5 minutes because Ebay do not officially permit the sale of CBD products.

However, CBD is for sale on Ebay and sellers get around the content filters by just omitting the word CBD and using terms like “Hemp Extract Oil 4500mg” for example. But everyone knows it’s CBD that’s ostensibly being advertised.

Now any CBD Oil manufacturer would immediately see red flags upon seeing this product at this price – the supposed 4500mg of “Hemp oil extract” content (i.e. one would rightly assume that means 4500mg full spectrum CBD) alone costs more than £14.95 – even when buying in large bulk direct from a hemp farm. Then there’s the cost of the bottle, the carrier oil, labour to fill the bottle, cost of printing the label, Ebay fees, Paypal fees, 1st Class postage, potentially 20% VAT, oh and ideally some profit margin.

Basically in selling a 4500mg oil at £14.95 you would be losing a huge amount of money on each and every sale, even as the manufacturer.

So we already had big suspicions about the product and the way it was advertised, but thought we’d test purchase it and send it off for lab testing to find out for sure.

When the results came back it was still shocking to see, even though expected. There were ZERO cannabinoids in the product, absolutely nothing, zitch, nada. It’s quite simply hemp seed oil – that costs about £15 per litre (15p per 10ml!) to buy in, and nothing else.

Now the seller might turn around and say, “well in fact we’re only selling it as hemp oil, that’s what it says on the plastic tube we package it in, and in the ingredients on the Ebay listing we state just 100% organic C.Sativa oil”.

But they are obviously intending it to be seen as CBD oil in their Ebay listing for the following reasons:

Here is the lab report, with screenshots of the Ebay listing and a photo of the product as it arrived. 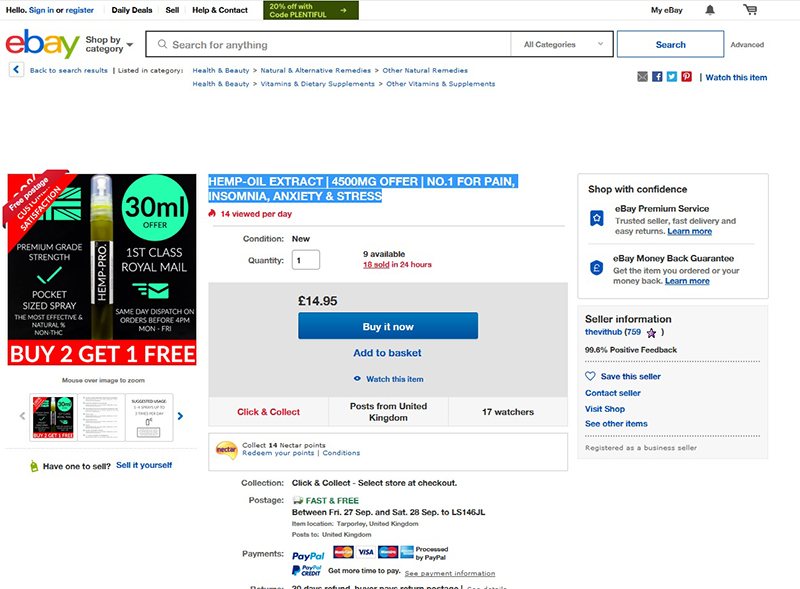 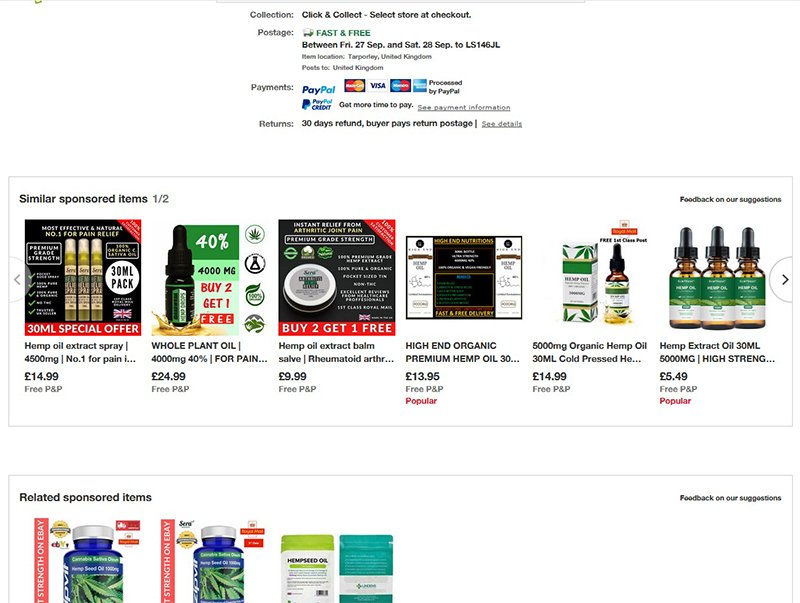 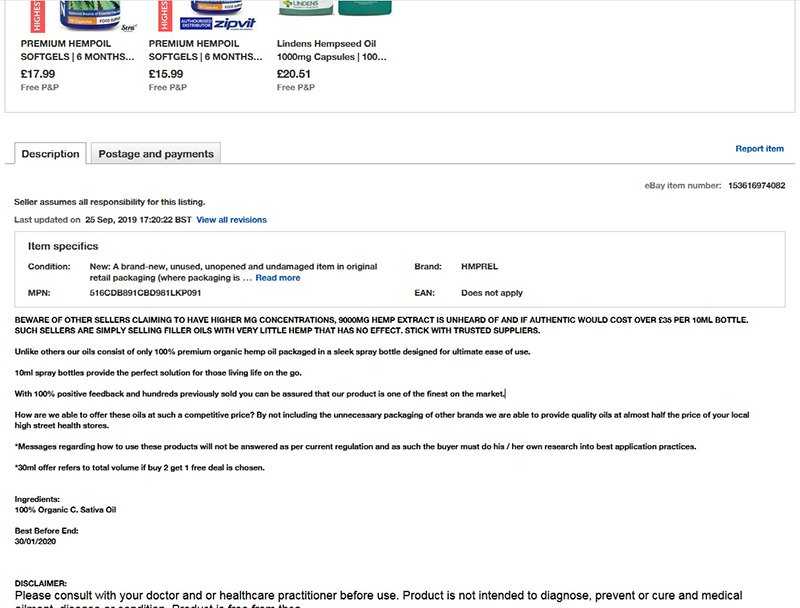 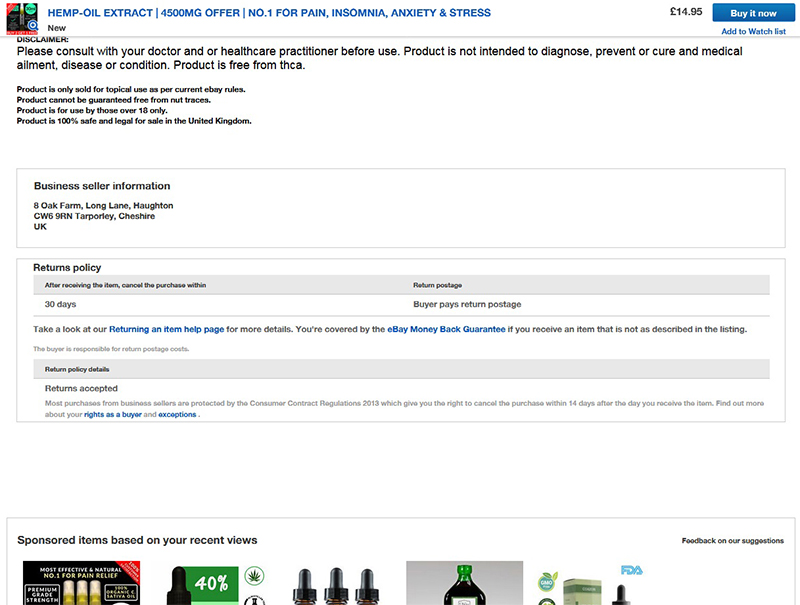 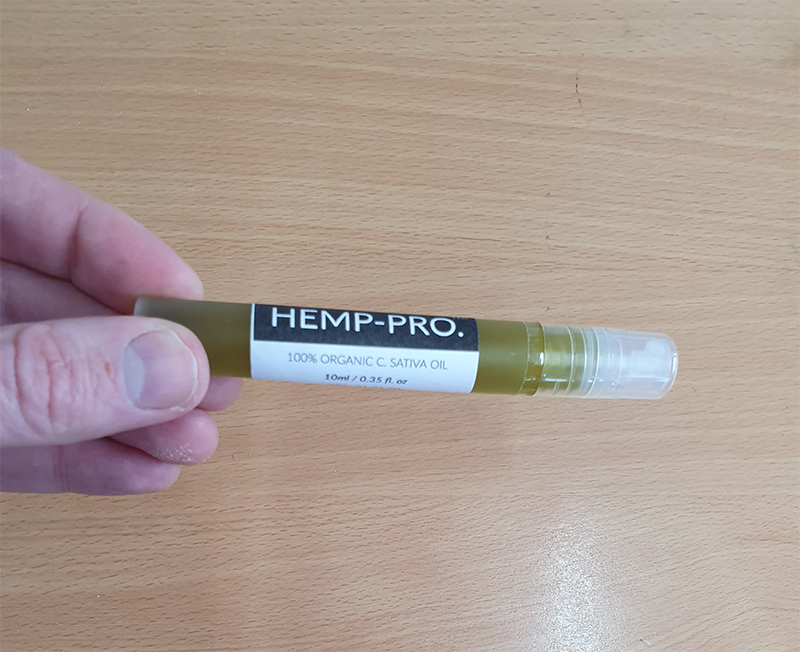 And finally the lab test report. Note “<0.03%” is the lab’s way of saying “Not Detected”, in other words if there is any present, it’s the tinest of traces, below the sensitivity of their analytical machine. Certainly not the 4500mg claimed in the seller’s Ebay product listing. 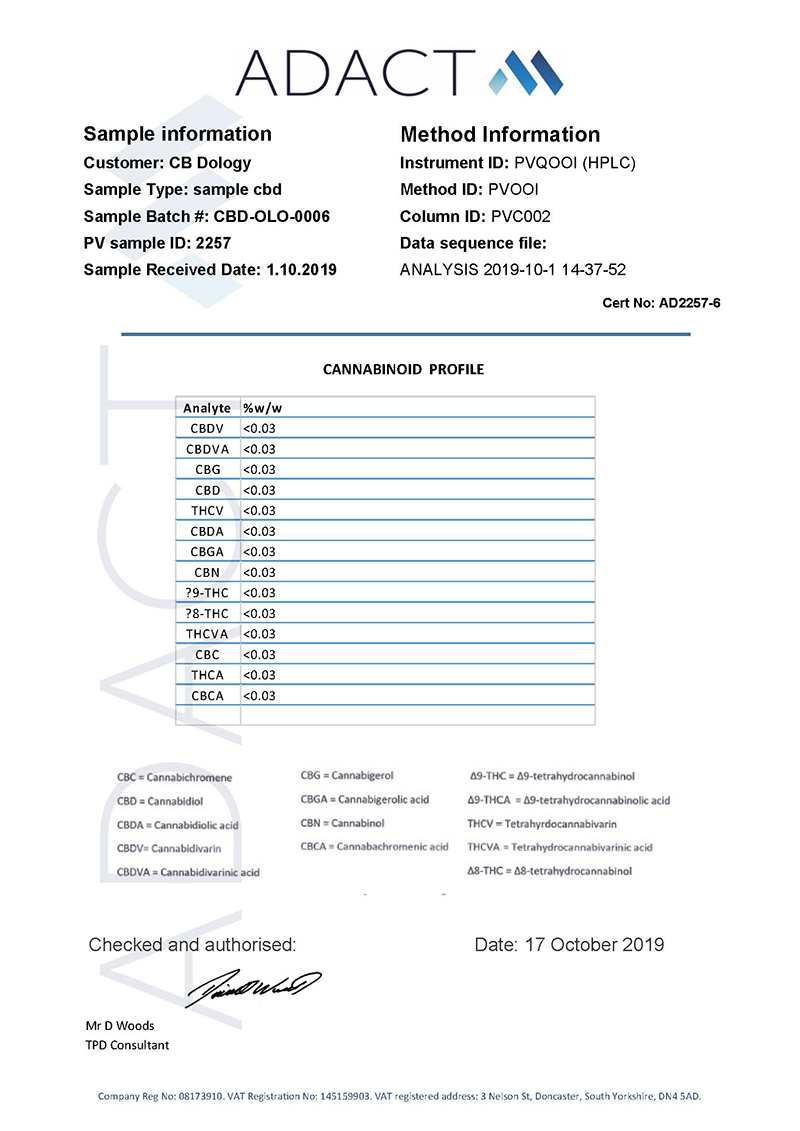 So I think the moral of the story, when buying CBD oil, is this – if it’s too good (i.e. cheap) to be true then it probably is! And read the small print and ingredients list carefully.

It’s long been known in the CBD industry that there are a lot of fake CBD products, and falsely advertised CBD prodcuts, being sold by sellers on Ebay. Impossibly cheap prices usually give the game away to other CBD vendors who know the true cost of producing these CBD products, but of course many consumers won’t know that £14.95 for a 4500mg oil is simply impossible.

This issue is of great concern to legitimate CBD shops for a number of reasons, but primarily:

So this concludes our investigation! If you found this article interesting we might suggest next reading our guide to controlled substances in CBD.

Our Top 5 Tips for Buying and Using CBD Oil