We’re pleased to announce some exciting news – CBG (Cannabigerol) is coming soon to CBDology and we’ll be launching our CBG Oil range in the New Year.

Now many readers may be wondering what on earth CBG is and how it relates to CBD, so we thought we’d publish a useful guide for beginners to prime you with the basics.

CBG is one of the 120 or so cannabinoids found in the hemp plant, along with the more familiar ones that most people have heard of such as CBD and THC.

It is known to interact with a wide varitety of receptors throughout the body meaning it has a correspondingly wide range of potential therapeutic benefits.

CBG is effectively a “stem cell” compound, in that it’s the building block compound in the hemp plant from which all the other cannabinoids develop from.

In the mature hemp plant at the point of harvest, CBG only makes up about 1% of the plant at the very most and that is far less than CBD which typically constitutes 5% or more.

However in the young plant, nearly all of the cannabinoid content is CBG and there’s none of the other compounds present at that stage. However, as the plant grows, most of the CBG gets transformed through a process of biosynthesis into the other cannabinoids such as CBD, CBDa, THC, and CBN.

So CBG is the precursor to the other cannabinoids: 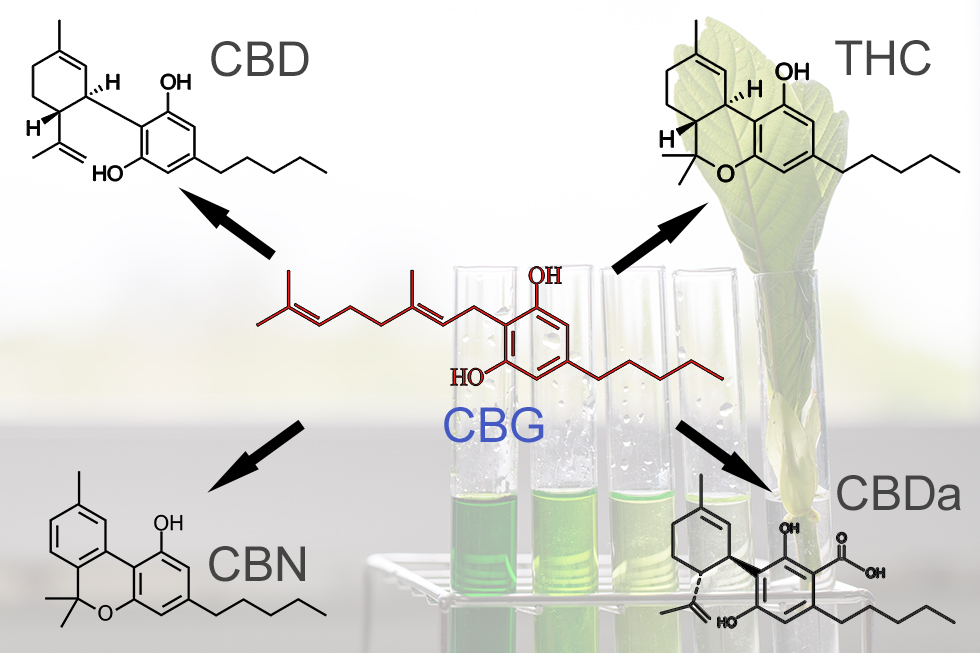 Ok, so with the scientific bit out of the way, you’re probably wondering, what are the specific benefits?

There hasn’t been a huge amount of clinical research into CBG as scientists have only recently realised it’s potential (if anyone is interested you can find a summary of the research papers published to date here about CBG) but anecdotedly it appears to be very good at pain-relief, perhaps even better than CBD.

CBG is also reported to be more energising than CBD, the latter having more of calming effect.

You might also be wondering why CBG hasn’t been widely sold hitherto. One reason is that the raw material is very expensive. At the moment pure CBG costs about 5x the cost of pure CBD, although we expect this will come down as the market for it grows and more hemp farms start to produce it.

To do this, hemp farms have to harvest the plants young when they have a much higher CBG content, but of course they’ve been reluctant to do this because CBD is so popular. For CBD production they need to let the plants grow to maturity, but at maturity, there’s almost no CBG left!

Anyway, the good news is that we’ll be stock our CBG oil range from early December. CBG is not a replacement for CBD of course, it simply complements it. We will also be launching our CBD/CBG combo oil, CannaDUAL™.

Also we will be stocking CBG Isolate, the pure powder form of CBG, in retail quantities and also stocking wholesale and bulk CBG.

Our Top 5 Tips for Buying and Using CBD Oil